When picking up a mistake in your Professor’s presentation leads to over a decade of mentorship. | Fight Food Waste CRC

When picking up a mistake in your Professor’s presentation leads to over a decade of mentorship. 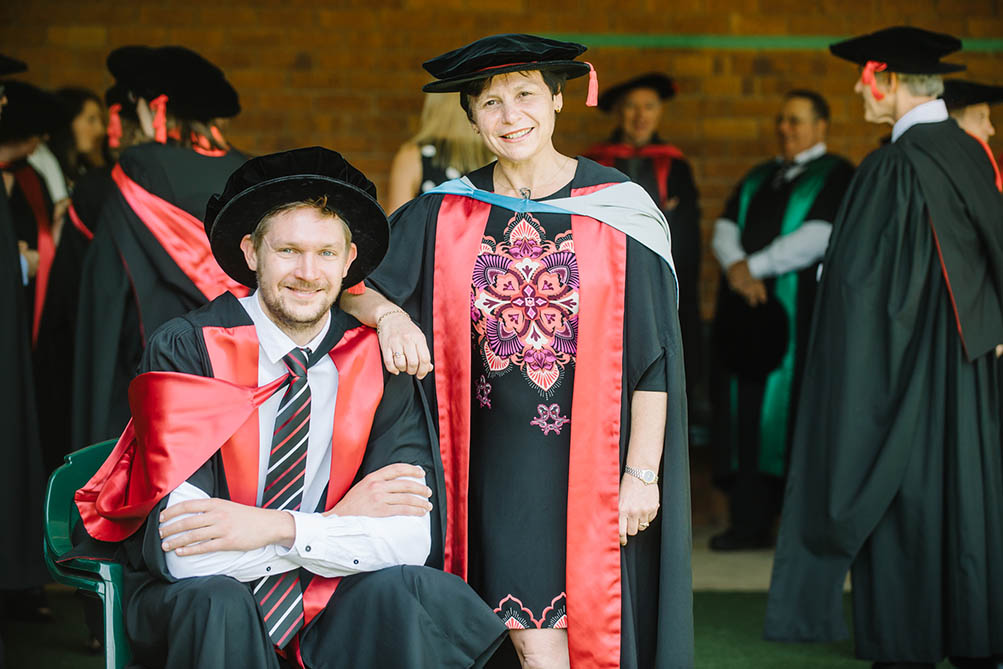 Bernadette McCabe is Principal Scientist at the Centre for Agricultural Engineering, University of Southern Queensland. She is also Project Leader on our Fight Food Waste CRC project Making Australian Country Choice circular. Bernadette sees many students come through the university doors in this role, and many who exit never to return. What she does spot is the student that is worth the investment of her time.

In 2008, Peter Harris was taking one of her undergraduate subjects in microbiology. He even recalls correcting one of her lecture slides. His initial assessment was that she was ‘quite serious and stern’; however, working with her during his honours changed that view. Bernadette and Peter remained in contact following this when Peter took up a Research Assistant position and then enrolled in a PhD. As his primary supervisor for his PhD, Bernadette was there to guide Peter through the ebbs and flows and provide support.

The supervisory relationship is critical in the academic world, especially as the student moves into a PhD’s independent research journey. Having the right supervisor makes a significant difference in the probability of completion by the student. In Peter’s case, Bernadette wasn’t someone he saw as being ‘stuck in their ways’. She would allow him to talk and share his thoughts and discuss things. Like any normal relationship, Peter and Bernadette had disagreements. However, it was never personal.

Respect between the student and supervisor is a critical element. In this case, Peter has always been very impressed with Bernadette’s amount of knowledge in terms of the national and international scene for bioenergy. So while Peter focuses on the detail of the technology and processes involved, Bernadette is very aware of opportunities and regulatory limits. They work well as a TEAM!

A remarkable outcome of this particular mentorship is that Peter knows he will always consider Bernadette as his mentor. She doesn’t claim to know everything, but she helps him when he needs it to further his career. And laughing together is always such a bonus!

There is so much written about the supervisory relationship by the Thesis Whisperer or Tara Brabazon or the many other online repositories to support PhD students. We just wanted to share this good news story from the University of Southern Queensland’s Centre for Agricultural Engineering!